Legion is a horror-fantasy movie directed by Scott Stewart released in 2010. For its plot, dialogue, and religious theme, the movie Legion (2010) gets mixed reviews from critics.

Tagline When the last angel falls, the fight for mankind begins.

At a remote desert truck stop, the fate of the world will be decided. Evil’s armies are amassing. Armed and united by the Archangel Michael (Paul Bettany), a group of strangers become unwitting soldiers on the frontlines of the Apocalypse. Their mission: protect a waitress and her sacred unborn child from the relentless, bloody siege of the demonic legion. Also starring Dennis Quaid (G.I. JOE: THE RISE OF THE COBRA, VANTAGE POINT), Tyrese Gibson (TRANSFORMERS) and Lucas Black (JARHEAD).

The movie starts with a verse from the Holy Bible where God warns mankind about His anger and that people must be afraid of Him.

Come, Ye children, listen to Me.

I will teach you the fear of the Lord.

Here begins a story of a girl that she shares her childhood story. Her mother always told her to pray to God and she did that. But one day her parents became fight each other and separated. After the incident, the girl becomes angry with God and stops praying.

The scene changes to the present time 23rd December midnight in LA.

An angel falls from the sky to the ground. He cuts his wings with a knife and goes to a medical shop. He stitches the wound by himself. Now he looks like a normal human.

After that, he breaks into the firearms store and collects a lot of weapons.

When he comes outside two policeman tries to stop him. Suddenly one of them becomes possessed by some unknown creature and starts talking to the angel. He mentions the angel as Michael and says that God didn’t instruct him to do these things and asked why he is doing that. He also warns him that he will die like other humans.

Then the possessed man kills another police officer and Michael kills the man and leaves the place by taking the police car.

Here scene changes to the Paradise Falls Diner which is stated in the Mojave Desert.

We see a young boy Jeep and a pregnant woman Charlie talking with each other. Charlie doesn’t want to carry the child but it was too late when she went to the hospital for an abortion. So, after the birth, she wants to give the child to an orphanage. But Jeep wants to keep the child and wishes to make him grow with her. Charlie laughs at Jeep.

Then a very old lady enters the diner. She starts talking with Anderson’s family who is also stuck in the place. Howard and Sandra are husband-wife and their teenage daughter is Audrey.

At one stage, the old lady becomes so violent and acts weirdly. She climbs the ceiling as if she is not a human but a reptile. Then she bites Howard’s neck.

Then Kyle shoots the old lady with his gun and she died.

Howard needs emergency medical support asap and that’s why Sandra & Audrey move toward the city with him in their car. Kyle and Percy also go with them. But after moving some distance they were attacked by a flies-storm. So, they back to the diner again.

Michael comes to the diner and gets out of the police car.

Bob becomes so scared after the old lady incident. Therefore, when Michael arrived, Bob points his gun at Michael and wants to show his teeth.

After confirming that he is no threat then Michael gives all of the weapons. He warns them that many creatures like the old lady will arrive soon and they need to defeat them. Otherwise, they all going to die.

Later at night, Michael instructs men to go to the roof and guard. On the other side, he wants ladies should remain safe inside the building.

After some time, an ice-cream car seems coming toward the diner. The ice-cream man comes outside from the car and he is also possessed. His hands, legs, neck, and mouth are so lengthy and his teeth are sharp too.

He tries to attack them but Michael shoots him down.

Later, a countless number of possessed people come and attack them but they protest them with gunfire. Middle of the fight, Howard is taken by a monster.

After finishing the wave, Bob asks Michael about what is going on here and why?

Michael tells them that God lost faith in humans and sent angels to destroy mankind as He destroyed before. Then Michael points out Charlie’s baby and tells them that her baby is destined to be the savior of the crisis so angels are coming here to kill that baby. And finally, he reveals that he is the archangel, Michael. He also got an order from God to destroy the human race but he disobeyed the order and come to save the child. Because still believe that humans will regain faith in God.

The next day, they see Howard is tied in reverse crossed form and his body is full of toxic chemicals under the skin. Howard is screaming for help.

Sandra runs towards Howard and he blasts. Percy tries to protect her and dies instead of Sandra.

After the incident, Sandra is tied to a chair inside the building.

Later at night, Kyle is guarding with a gun. Then the next wave of possessed people comes. This time they are not attacking them. Suddenly Kyle sees a boy who seems not possessed among the monsters. So, he goes near the boy to save him. But within a moment the boy turned into a monster and kill Kyle by biting. This was a trap from the opponents.

At midnight Charlie gives birth to a beautiful baby.

Then archangel Gabriel comes to the place. Michael attacks Gabriel but fails. Then Gabriel kills Michael with a full of tear eyes. Because he needs to follow God’s order. Gabriel becomes surprised when sees Michael’s body become disappear.

Middle of these Jeep & Charlie flees by a car to protect the baby. Suddenly Jeep notices his skin starts to fill with diagrams/tattoos that are seemed in Michael’s body.

Then Gabriel comes and attacks their car. Jeep lose control and get into an accident. Suddenly Michael comes to the spot from the sky like an angel with two large wings.

Gabriel becomes shocked. Michael tells him that he (Gabriel) followed only God’s order but he (Michael) followed what God want.

This is the reason why God give Michael another chance.

After that Michael defeats Gabriel but does not kill him.

Gabriel flies in the sky with injury.

Michael tells Jeep that he is the world’s protector now. Then Michael flies into the sky.

In the last scene of the movie, we see Charlie and Jeep driving a car with the baby. They seem so happy and determined to save the baby. Because the back of the car is full of guns, rifles, and bullets.

What was special about Charlie’s baby in Legion (2010)?

Charlie’s unborn baby is destined by God as the second Christ for humanity. This is the reason why the monsters are coming to take down the special baby.

After knowing the truth Charlie becomes confused because she is just a waitress so why did God choose her. Michael replies to her that God has no separation between rich, and poor people.

What are the monsters in the Legion movie?

Michael reveals that all monsters are possessed by angels. They possess people obeying an order from God. Therefore, many try to mention God as the main villain of the movie Legion.

But I don’t agree with that.

Because there are many small details and symptoms that God wishes to survive the human race and loves humans.

Who is the old lady in the movie Legion?

The old lady is the first attack from God’s army on the Paradise Falls Diner.

Jeanette Miller plays the role of the old lady named Gladys Foster in the movie Legion. Though she plays a very short-term minor role her attendance gives the movie a strong weight.

The old lady is so creepy and horrific which makes her iconic. Through her little dialogue, we also get some hints about the full film story.

Who is the ice-cream man in the Legion film?

At midnight on the 23rd December of Legion movie, an ice-cream man arrives in the diner. He is another monster in the movie. His enormous hands, fingers, legs, face, and creepy teeth with a scream are suitable for a horror movie.

Doug Jones plays the role of the ice cream man in the film.

Charlie, Jeep, and the Christ baby survived till the end of the movie Legion (2010).

Is the Legion movie based on a true story?

No, the movie Legion of 2010 is not claimed as a true story officially nor any other legit sources. This is not completely matched any historical or religious phenomenon either.

Since God gives the order to destroy mankind thus many thinks that He is the villain of the movie. But that is incorrect.

In the first scene of the movie which is a quote from the holy bible says God wants to ‘teach’ people about His fear.

God did this before, teaching humankind by flood which is stated in Genesis.

Therefore, the movie Legion is not an anti-biblical film.

What is the movie legion based on?

The movie plot is so dramatic and an act of courage from the director. According to Bible, Legion refers to the army of demons possessed by the Gerasene demoniac.

In the movie, God is trying to destroy mankind.  But in-depth, the reason behind all of these is people’s unfair work, thought, and faith in God. Which triggers God to take the action.

When people turn in the wrong direction from God’s path then He teaches people in a tough way. This is the moral of the movie Legion. 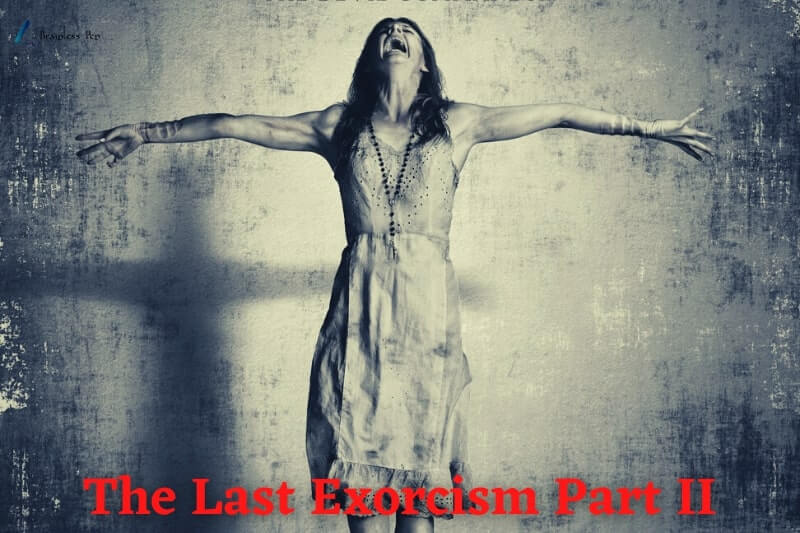