When the hospital was unable to do anything about a fatal familial insomnia patient, a medical student asked her brother to move to a secret basement facility for alternative treatment. Is it a demon-possessed? 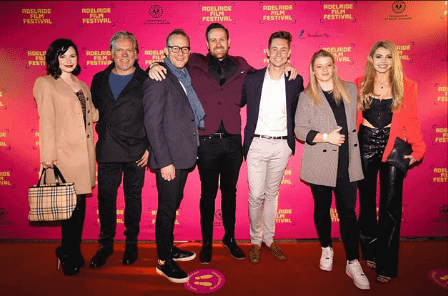 Sometimes you will choose a movie at random. You just look at the poster and think it looks creepy, and the title makes you curious.

I don’t want to see the synopsis, I want to be surprised, I want to watch the movie with an open mind.

Then they entered the cards and told the whole story.

Now you know that “Awoken” is about fatal familial insomnia. But this is not all. One-third of people have some type of sleep disorder, 95% of people cannot fall asleep for more than 18 days and rarely survive. But if they do, they no longer need a doctor, but a pastor.

Well, we are going to see a movie about sleep disorders, there is no doubt that one of the characters will have insomnia for more than 18 days. Then there will be an exorcism. One of the risks taken by the film is to reveal a small plot at an early stage, and then keep the audience’s interest until the end. The story in the horror film has a twist here and a surprise there, so the question is, can this movie be more shocking?

At the beginning of the movie, a teenage boy was crying on his bed. An adult behind the boy stood up and pulled the zippers off his pants. He ordered the boy to go to bed with another little boy. But the youngest child sat on his bed, staring at nothing, and tore a few pages from the Bible.

The man approached him but saw the boy’s eyes turn white and he heard him recite verses in Latin. The next moment, the adult was killed.

A few years later, Karla and her friend Alice are in college. You are listening to Dr. Robert’s lecture. Since Karla’s parents passed away, she has also been her father. Robert was discussing the importance of sleep and Alice suggested that Karla sleep for a while alone.

Karla has not been able to sleep because her brother Blake is undergoing treatment for insomnia. The doctor has given up on him and told him to take home. Karla suggested consuming drugs that are illegal in the country. Her suggestion was met with “Shut up; we know better because we have more experience.”

Another medical student suddenly appeared to see Blake. Kara greeted him coldly and it was soon determined that she had a history with Patrick. Blake doesn’t care about his sister’s broken love life. Although Patrick is about to be kicked out of the hospital for not sleeping, he still plays cards with Patrick. 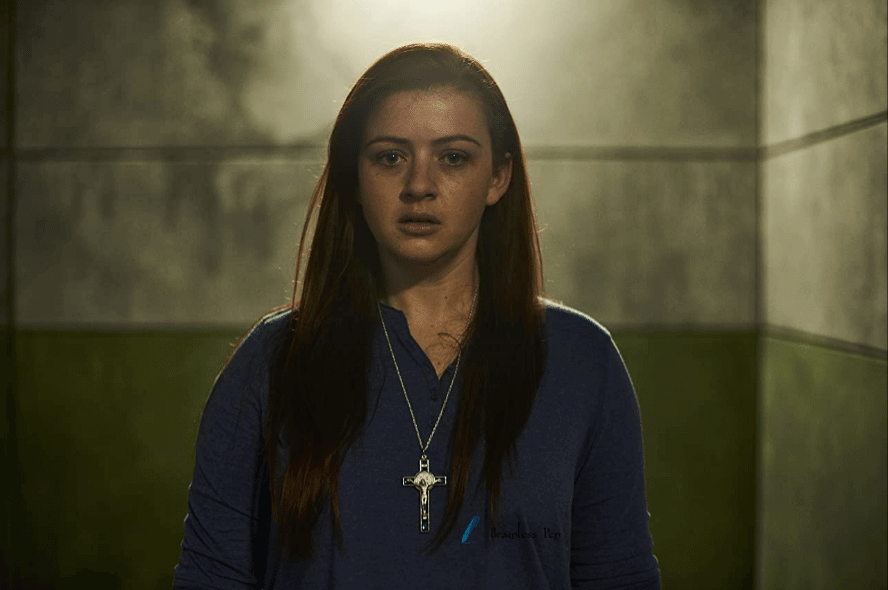 Karla asks Robert for help. Robert tells her that he and Karla’s father are in a secret basement in the facility. Where Robert and Karla’s father conducted experiments and research that were not approved by the university. Karla’s mother was also taken to the basement because she also suffered from sleep disorders like Blake.

Karla does not need more persuasion, because she wants to help Blake. Their father, a well-known doctor in the field, according to his book, is Robert’s friend.

According to the later scenes, Alice immediately joined the trend, because she loves Blake like anyone else. Patrick also came in because Blake wanted him to play cards or something by his side.

Robert did not ask the two uninvited guests whether they promised to keep all these secrets and showed them the secret lair that they entered through the elevator that needed the key.

This is a creepy low-light basement with a long corridor and supposedly clean bathroom, decorated like a hotel room.

Two patients are already receiving treatment, Angela and Christopher. There is only one bed left, but fortunately, Blake will fill it.

They started to work, most of the time just sitting in front of the window to observe the patient and writing a lot of notes.

Blake spends time playing Catan Island brought by Patrick. He also tried to reach a reconciliation with Karla but failed. Karla was crying because of how Patrick left her when Blake was sick. Patrick responded that he was a possessive boyfriend and could not accept that his girlfriend paid more attention to his sick brother than him.

Blake started to feel better, or others thought so, especially after he changed the medicine. You can sit correctly but still stare into space.

Christopher is busy wearing headphones, which makes Angela hear Blake whisper all the time. This frightened her, she kept staring at Black as if he was going to kill her. After a few scenes, she will be right.

At the same time, Karla and Alice found a videotape of their father’s experiment behind the bookshelf. They both looked at it and saw that their father had invited a pastor, which upset Robert very much, who believed that science had all the answers.

But Karla’s father knew something was wrong with his wife Sara. He knows her best and must have read about how people who haven’t slept for more than 18 days need a pastor. He has prepared the pastor.

The girls do not watch all the videotapes at once, because they want to keep the final result of the experiment until the end of the film. The video is only three minutes long, but the girls think they don’t want to watch it now.

Blake begins to tear the pages out of the Bible. It is mandatory to place religious books near each patient. Because you know, if the patient hasn’t slept for more than 18 days, he needs a pastor.

This is just an unnecessary scene of blaspheming religious things to show demon possession.

Soon, Angela went crazy because she couldn’t let Blake drink her cereal. She was screamed, but only Karla was there because she didn’t like to sleep. He did not try to speak to Angela, nor did he rush in immediately. Instead, let Angela go to the chair and use the microphone to hang up. Karla walked in, but Angela didn’t even fight to survive. She is dead.

The student’s task now is to dispose of the dead body without anyone knowing what happened. Of course, the elevator key will not turn. Of course, Robert called for help, but the maintenance meeting will be delayed tomorrow.

The body is placed in another room, and Karla agrees to let Patrick watch the video with her. Alice had already gone to bed reading the diary she found and heard a whisper from the vent. She warned Karla about demons and enchantments, but it was not the time yet. 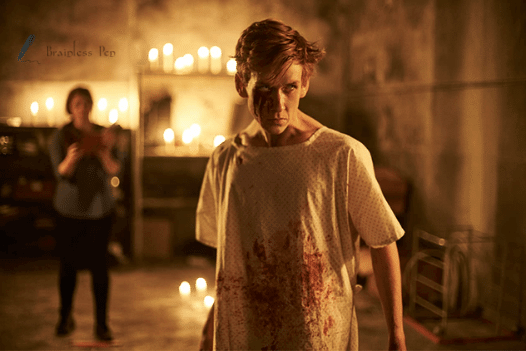 Now, Karla and Patrick must see that Karla’s mother’s experiment is not going well. He tore off the pages of the Bible and glued them to the window with the blood of other patients.

Everyone involved in the investigation was ready to enter, but the recording was stopped. Patrick and Karla concluded that there may be a tape on the camera. They found that yes, they were all dead. Robert chased after the priest who hid the tape so that one day Karla and Blake would become medical students, come to the basement to experiment and find the tape.

It turns out that Robert is a mentally ill patient and they think the wrong people will come to do experiments on people.

Alice swallowed the cable and died. Karla and Patrick found that the phone could not be reached at all. Christopher died somewhere in it all. The demon who owns Blake knows Karla very well and can call her KJ.

Robert revealed that the boy in the first scene was happy that his tormentor was killed by a demon. Since he was obsessed with bringing the demon Idimu into this world because he is a hero. The demon is stuck between the dream and the real world. Robert wants to bring him into this world to thank you for saving him.

Karla began to recite random verses from the diary, but after years of research, Robert recites the mantra that brought Idimu into this world because Blake is ready. Blake walked with his hands upside down, so yes, he was ready to be at the front door.

Karla finally finds a poem that weakens her possessed brother but is not very good at recitation correctly. This resulted in Patrick being stabbed.

Karla and Robert clashed, eventually ending up with Robert jumping onto the stake. He died, Karla finally said the correct verse to the exorcism and saved her brother.

But in the final scene, when Blake falls asleep, Karla is wide awake.

What are the odds of winning? A third of them? The movie relies on cliches and thrillers to further the development of the plot, which was announced at the beginning.

However, the weak plot is maintained through good performances and some effective shocks.

Although the script and delivery are weak, “Awoken” is a well-made film, and there are several aspects that are absolutely commendable.

First of all, this is a movie that understands budget constraints – the movie takes place in a few tight spots and makes the most of them by creating a strange atmosphere through creepy and thoughtful set design.

Despite the clichés, some of the panics in the film are quite effective (especially the panic towards the end) due to the extensive use of lighting and locations available to the filmmaker.

At the same time, these aspects are also very frustrating: if you put more energy into the story and the characters, “Awoken” will be a decent, scary, and satisfying watch.

Unfortunately, the script is indeed derivative and scary, the characters are very underdeveloped and mostly annoying. Therefore, the inexperienced actors, who account for the majority of the cast, have almost no content to cooperate, which has a negative impact on their performances.

However, if you are a die-hard fan of the Possession and Exorcism movie, you might want to give Awoken a watch-it has enough panic and weird moments to satisfy those horror audiences who are not too picky and just want to watch one.

NEXT: Spiral: From the Book of Saw (2021) Ending Explained

13 Ghosts (2001) also known as Thir13en Ghosts is a supernatural-slasher horror movie directed by Steve Beck which is a remake of the 1960s movie 13 Ghosts. Although many aspects of the movie are quite Read more…

Monstrous (2022) is a supernatural horror movie directed by Chris Sivertson. The movie starts as a regular horror movie but as the plot goes deeper it turns into supernatural like The Hole in the Ground Read more…