AM1200 is a short film of 2008 written & directed by David Prior. The film achieved several awards & nominations in the Lovecraftian horror genre and picked a lot of respect from the audience.

Investment analyst Sam Larson is on the run after he was involved in a financial scam. His world is turned upside down when he is haunted by an evangelical radio station called KBAL AM1200.

Directed & Written by David Prior

Tagline ‘Get ready for the live feed.’

The short film AM1200 starts with a piece of news showing a man named Harry Jones suicide at his home. And one of his colleagues Sam Larson is nowhere to be found.

As a viewer we see Sam leaving the city in a hurry by driving his car. At the highway, a police car starts chasing him on suspicion for any trivial reason. Sam starts getting scared. Luckily, at the same time, another overspeeding car passes them and the police car starts following that leaving Sam.

Sam panicked a lot thus he parked the car on the side of the road and vomited. At that time, we see some flashbacks of Sam’s memory with Harry Jones.

They were drinking at a bar and Harry almost lost control. Because of being drunk, Harry started talking about the job and some of his secret thoughts. By Harry’s opinions, they all worked like slaves, and if he had the chance, he would steal a large amount of money and flee. Though Harry took the conversation as a fun talk, Sam seemed too serious.

Following that, Sam commits corruption which is rearranged like Harry is the culprit and Sam escapes. Harry thinks the scam happened because of his advice. That makes him so depressed and triggered him to suicide. This is the death of news we saw in the opening scene of the film.

The scene changes to the present time of Sam where he looks very sad because he realizes the cause of Harry’s death is himself. But still, Sam does not turn back and continues driving on the highway.

It becomes night and Sam is still driving. Sam’s drowsiness catches his eye and the car starts getting off the road. It looks as if Sam may be gone but at the last moment from an accident he wakes up. Finally, he remains safe. 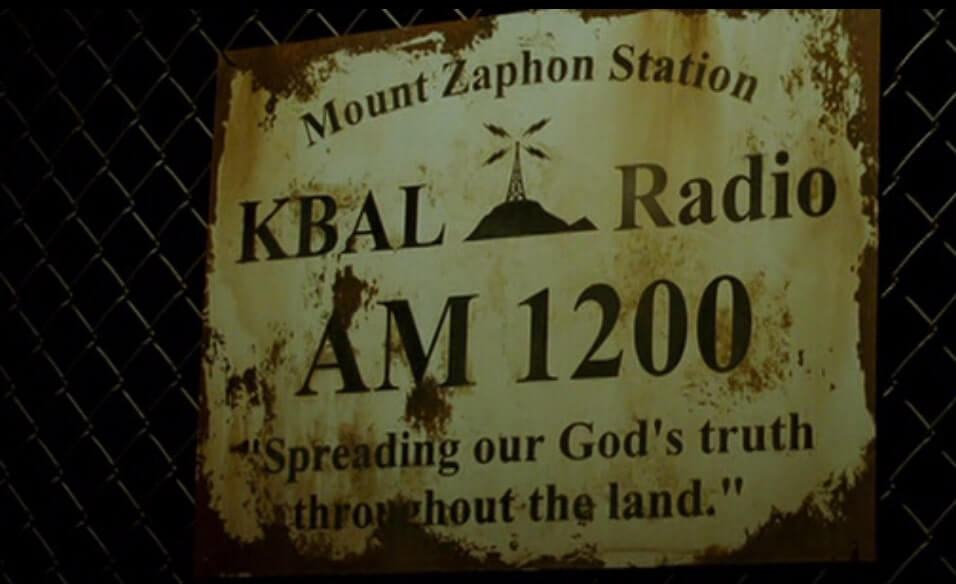 Even after that, Sam doesn’t stop and continues driving. He turns on the radio so that any show can reduce his sleepiness. Then at AM frequency 1200 hertz, he received an SOS message with some strange noise. Someone is calling for medical help from the radio station KBAL.

After some time the highway is divided into two ways. So, Sam needs to choose one. But for any unknown reason, he opens a map finds the KBAL Radio station and moves toward it.

Spreading our God’s truth throughout the land.

After reaching the station, Sam regains some of his consciousness. He realizes he made a bad decision. Therefore, he moves to leave the place. But there is no other exit gate. When he moves towards there is another signboard “End.”

Sam decides to turn around and leave by which way he entered. But another strange occurrence happened. Suddenly his car stops working. When Sam sees the engine break down, he becomes quite worried. 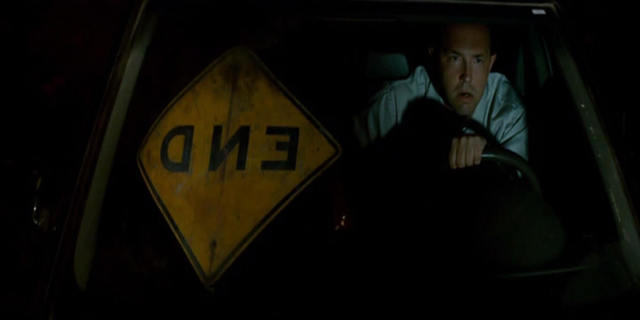 No way out from the station.

Then a flashlight comes from inside the forest and it’s turned off without any notice. This makes Sam scared and he just runs and locks himself inside the car. There is a clearly frightened look on Sam’s face.

Sam realizes that inside the car he is unsafe and neither can he get any help. Thence, he takes a wrecking bar, a torchlight and goes inside the building.

The radio station looks like an abandoned building. There is no sign of a human being and neither light.

After entering the building Sam notices the basement door is strongly protected from moving. There is no person in the station and furniture is scattered all over. He sees a telephone at the reception desk and goes near to use it. But the phone is dead.

Then suddenly all lights start brightening like some kind of extra voltage or frequency starts passing through all the electronics. The brighten duration is not more than a few seconds. But between this time, he sees a corridor and starts walking in the direction.

He finds a bunch of human photos hanging on the wall and it is clear that they all are employees of the KBAL radio station. After that, he finds the radio telecast room.

Sam enters the room; it is dark inside. He notices everything in the room is acting strangely. As if everything is affected by some invisible force.

Shockingly, Sam sees a man on the floor tied with a handcuff when he moves the torchlight. At first look, Sam thinks the man is dead. But suddenly the man wakes up and starts laughing after seeing Sam.

At that moment, a phone call comes in and Sam receives it. But there is no one on the other side, rather it echoes Sam’s voice. And that time the strange man starts screaming and shouting that he can’t and won’t do those things anymore. Sam becomes confused and asks him for help to leave the station.

Sam throws a torchlight on the wall and finds the strange man’s photo. The man is an electrical engineer of the radio station named Jonah Henry.

Jonah tells Sam that Sam can not leave the place, if he tries then it will cut him into pieces. Jonah also talks about kinetic pressure inside the mind. He says an iconic quotation.

We transmitted, it receives. It transmits, we receive.

Jonah starts freeing himself from handcuffs but not in a natural way. He just starts pulling his hand. Skins & bones are broken and come outside brutally but Jonah doesn’t seem to be feeling any pain.

After some time Jonah makes free his hand which is totally crushed. 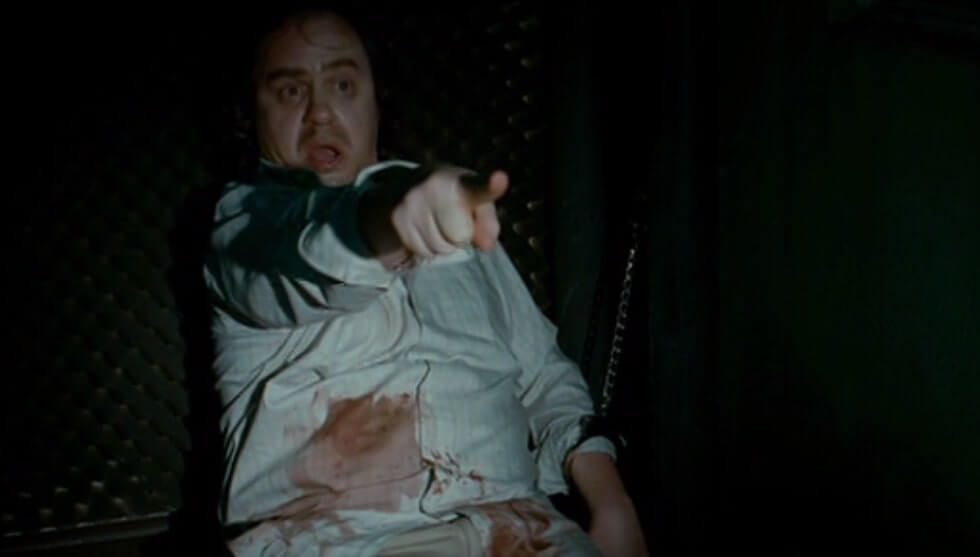 Then Jonah starts walking towards Sam without saying any word. It seems Jonah is controlled by an unknown entity. For self-defense, Sam hits Jonah’s head several times with the bar which makes him dead.

Sam is leaving but suddenly he feels a strong pressure of frequency inside his head and he falls. He can’t move and his eyes have no sign of consciousness.

Suddenly Sam’s body stands and it is clear that now some mysterious force is controlling his mind & body.

Sam takes Jonah’s body into the basement. Then he lays the body on a table and takes a hand saw. He almost cuts Jonah’s hand but at that moment he regains some of his consciousness. So Sam tries to protect himself from doing such brutal deeds.

Then again, the frequency comes and he loses control.

This time the frequency sounds like the noises from the first time he listened to the radio at the highway.

Here comes the main twist of the film.

We see, there is a deep well in the basement. Sam looks into the well.

Suddenly, at the bottom of the well, a giant eye of any unknown creature appears. It is so big that the whole bottom area of the well is covered by only one eyeball.

Sam is also being watched by the eye.

Then the eye moves and a giant & creepy mouth comes to the end of the well. The mouth opens.

Sam brings Jonah’s chopped body parts and throws them into the well.

After that Sam returns to the telecast room. Turns on the radio telecast system and leaves an SOS message for help, the same way he received.

And a car seems to be coming to the KBAL Radio Station whose frequency is AM1200. 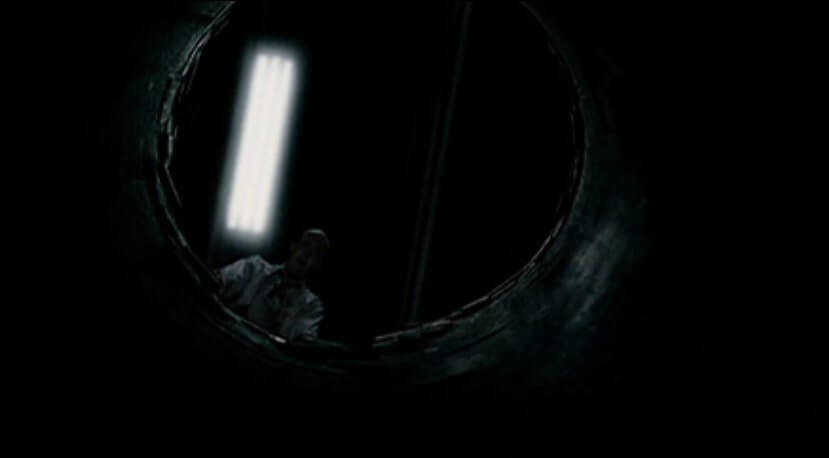 Sam looking inside the well.

Sam was involved in a financial scam with Harry Jones. The incident flows into Harry’s suicide. Sam never thought that the incident goes such far. So, he becomes depressed but still not ready for atonement.

Now here comes Karma theory for the AM1200 movie.

Sam did something extremely wrong with Harry, so mother nature punished him by creating a cosmic creature.

We can see Mount Zaphon Station written on the signboard.

On the Syrian-Turkish border, Mount Zaphon is a real mountain. Locally, it is known as Jebel Aqra.

According to ancient Canaanite mythology, Mount Zaphon was sometimes considered the home of all the gods.

Could this be a sign that there is a cosmic God behind it where God lives?

Kbal sounds very similar to Cabal and means cult. It could be possible that there is a cult behind the whole thing.

We see a mysterious flashlight coming from the forest side, and we have no idea who it is. That leads to the Cult theory.

It is possible that the man might be a member of a cult that summons the cosmic creature.

In addition, Jonah mentions that “they summoned God.”

The God of Five Powers

It does not have an exact description except for one eye and a mouth. The creature may have one eye, or perhaps a hundred or thousand. The remainder of the body parts contributes to a less clear picture of the creature’s size. Furthermore, we don’t know its power level.

Yet, I noticed there is a hint of the cosmic God’s power.

I believe David Prior did not simply coincidentally match all of the mythological mountain names in the film.

A series of black rocks can be found on Kbal mountain, and these black rocks are known as the “Valley of a Thousand Lingas”. These rocks are symbolic of the Hindu God Shiva.

Shiva consists of five powers. They are:

I find it interesting that the five powers are all made up of cosmic creature. As a result, it is likely that the creature is either Shiva or a pet of His. It is, of course, only a theory from Brainless Pen, and there is no solid proof behind it.

If you have any ideas or theories, feel free to share them with us in the comments.

AM 1200 (2008) is recommended as a ‘must watch’ Lovecraftian psychological thriller-horror film by Brainless Pen.

In the cosmic horror genre, AM1200 is an excellent film. Despite its average rating from many critics, the short film receives huge praise from audiences.

The Wicker Man (2006) is a reboot of the famous British movie The Wicker Man (1973). The movie starts with Nicolas Cage and his outstanding performance flooded all over the country. The movie plot is Read more… 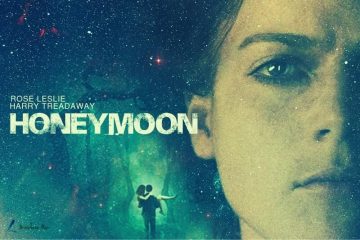 Honeymoon (2014) is a Lovecraftian horror movie directed by Leigh Janiak. A newly married couple comes to a Canadian forest to spend their honeymoon and something strange starts happening between them. As the plot goes Read more…