Chernobyl Diaries (2012) is a disaster horror-thriller film directed by Bradley Parker. The movie is based on Chernobyl Nuclear Disaster but its storyline is far more thrilling & an unpredictable ending.

At the beginning of the movie, we get acquainted with some of the characters. They are Chris, Natalie, and Amanda. They all went on a trip to Europe and now everyone is staying in Ukraine. Chris’s brother Paul lives here.

They are all now in Ukraine to meet Paul. He is Chris’s brother. Then they will all move to Moscow. Chris plans to propose to Natalie after reaching Moscow.

In the meantime, Paul offers everyone to give Pripyat an extreme tour. Pripyat is an abandoned town near Chernobyl where no one has lived since 1986.

In 1986, the Chernobyl nuclear reactor exploded, causing extensive damage known as the Chernobyl Nuclear Disaster. Since then, the level of radiation in that city has increased a lot. As a result, people were forced to leave the town overnight and the city was abandoned from then. Paul wants to give this city a tour for a few hours. At first, no one agreed, but at one point everyone accepted.

They go to a tour guide named Uri who will help them give this extreme tour. Uri is a former Special Forces soldier. He says there is nothing to be afraid of. Assuring everyone, he said that he had already taken several people on tour from there before. This time they meet two more people whose names are Michael and Zoe.

Uri picked everyone up in his van and started the journey. After several hours of travel, they arrived at the Chernobyl Explosion Checkpoint. The military stopped them there. Everyone is surprised because Uri said the city was abandoned. But the military says there is maintenance work being running in there so they are not allowed to visit. Naturally, it is a matter of surprise, why an abandoned city is under maintenance.

Uri turns them around and enters Pripyat by another road. There are no military guards on this road. They enter the city unhindered.

After a while, they go to the side of a river and see a mutant fish. The fish was still alive after being in the water for a long time. It contained big teeth like a piranha fish but it wasn’t. They moved away from there and began to enter farther into the city. This time we see many more such horrible fish floating in the river water. This means that the animals, fishes, and birds in this area have been significantly affected by nuclear radiation and have begun to mutate.

The group wandered around the city for a long time and at one point Uri brought them to an upper floor of a taller building. The Chernobyl nuclear power plant can be seen from here. Everyone took pictures there. After a while suddenly a bear ran away in front of them. Seeing the bear, it seemed that he was running away in fear. But surprisingly, no one wondered how a bear could climb so high.

They all got in the car to leave the place. But Uri noticed that the wires inside the car were damaged. Looks like the work of an animal. He tried to communicate via radio but got no signal. So, he decided to spend the night there. They all blocked the car door and window and waited for the radio signal. Uri said if help was not available in the morning, he would have to walk to the city. It will be a total of 20 to 22 kilometers of road.

Later at midnight, they heard a girl cry. Uri comes out with a pistol to watch. Chris also goes after Uri. After a while, a few shots were heard. Shortly afterward, the injured Chris returned to the car. He says Uri is dead.

At night they hear a variety of noises and at one point some dogs attack their car. Everyone thinks that Uri was killed by these dogs. But how could that be possible?

The next morning Amanda, Paul, and Michael get out of the car to see what has happened. Injured Chris, Natalie, and Zoe wait in the car.

Amanda, Paul, and Michael enter a cafeteria to follow the bloodstains. There they saw Uri’s body lying on the floor. His body has been scarred by radiation and, surprisingly, his body has been eaten by an animal. Here they take Uri’s pistol.

Suddenly an unknown creature attacks them. They can’t see the creature properly but somehow escape and come back to the van. They realize that they are not safe in this area. Amanda, meanwhile, sees a terrifying human-shaped creature in one of her earlier photos. So they quickly decided to move on.

Since Chris is unable to move, everyone decides that Chris and Natalie will stay in the car and the rest will walk to the checkpoint. With help from there, they will return and rescue Chris, and Natalie.

They start hiking to the checkpoint. Several wild dogs attacked them along the way. At one point, Michael was bitten by a mutant fish. They came back to the car.

It was night when they back to the van. They found the car overturned, and Chris Natalie was missing. They find a videotape that lets them know that human-shaped mutants attacked them and took Natalie away.

Undaunted, Paul’s team start looking for Chris and Natalie. At one point, they find her near a building. She was terrified. Middle of this, many humanoid mutants attacked them and Michael died. They start to go deeper into the building, and they realize that there are countless more humanoid mutants here.

In the meantime, the effects of radiation began to fall on the bodies of all of them. Their skin has started to burn, and their eyesight is declining. They realize that if they continue like this, they will soon become blind and their whole body will burn.

Suddenly many humanoid mutants dragged Zoe into the dark tunnel. Then Amanda and Paul quickly ran out of there.

Outside of the building, they see the Ukrainian army was there. They think that they are safe now. Paul walks towards them. Suddenly the army shot and killed him. This time Amanda fainted because of radiation.

When Amanda regains consciousness, she finds herself on top of a moving trolley. She sees some people wearing hazmat clothes. They introduced themselves as doctors and they want to help Amanda.

Here we find out that they were researching the effects of radiation on people by trapping them. These people, who have been affected by the effects of radiation, are humanoid mutants seen before. They call them patients. Some patients escaped that day. And the army came there to bring them back. Paul’s skin was burned due to radiation, and he lost his sight so the Army mistakenly called him a patient at first sight. As a result, they shot him.

As Amanda is being taken away, two people say that she has learned a lot. Therefore, she cannot be sent back.

They then imprisoned Amanda inside a dark room. The next moment we see, numerous humanoid mutants have attacked Amanda. The movie ends here.

There is an alternate ending to the movie Chernobyl Diaries (2012). After killing Paul, soldiers take Amanda to a dark room of a hospital (or a military research base). She is infected with radiation and her skin is burnt completely. She has no hair on her skin. So she now looks like other humanoid mutants. In the last scene of the movie, she screams & asking for help but no one answered.

The movie ends here with an unhappy ending. This is not as depressing as The Mist but it is enough to make you sad. 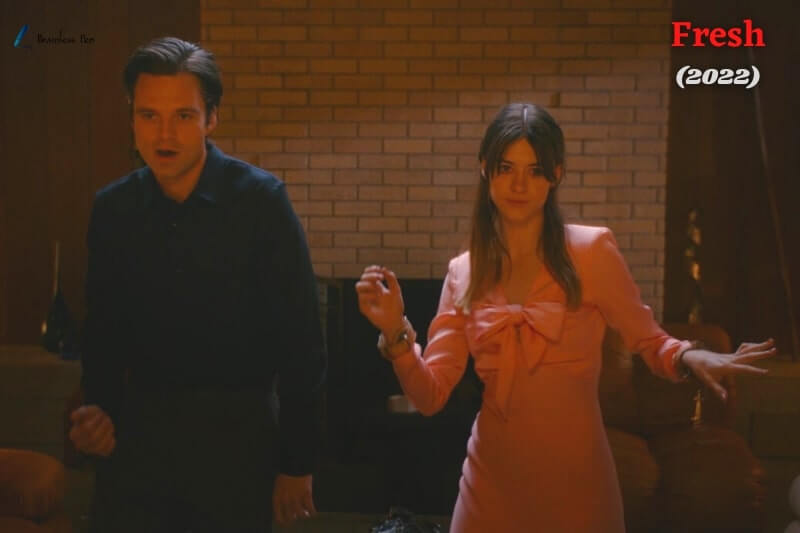